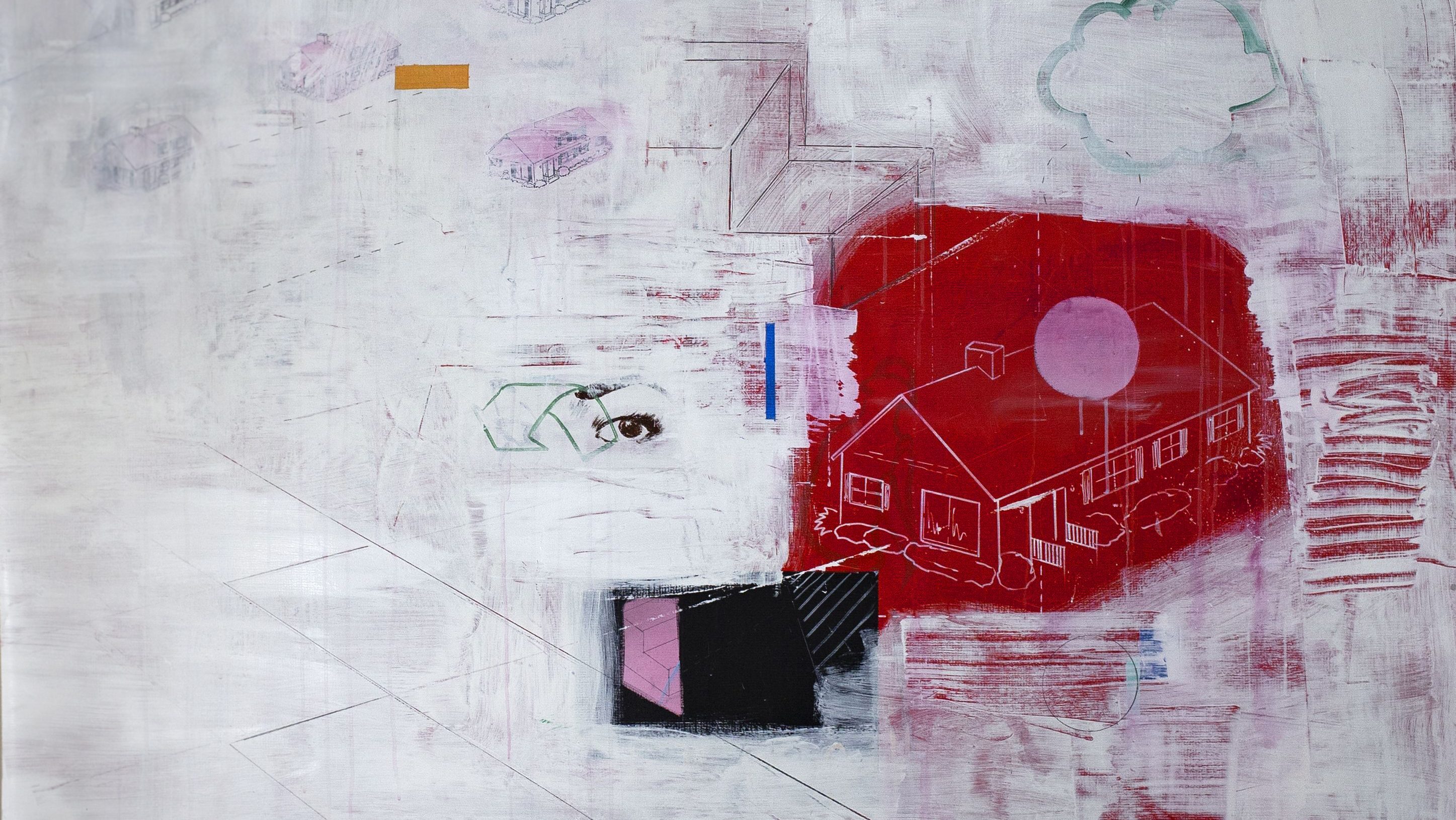 New Works / Alumni Four is the fourth in a series of exhibitions featuring distinguished McColl Center alumni artists. Zoë Charlton (2017), Lori Larusso (2010), and Izel Vargas (2008) employ the iconography of home to construct fantastical landscapes and distorted domestic spaces. Their works embody a collective tension at the intersection of personal memory and cultural identity, acting as both a critique of and an homage to conceptions of the American dream.

Zoë Charlton, based in Baltimore, Maryland, merges the human body with its environment in a series of collages that confront the fraught history of colonization in the United States. Like empty promises, the rigid edges of model houses and paper dolls refuse to fold into functional forms. Meanwhile, in a site-specific piece created for the exhibition entitled meant for the home-bred, a new being bursts forth with the resilience of kudzu. Lori Larusso, based in Louisville, Kentucky, challenges stereotypes associated with domesticity. Brightly painted piles of dirty dishes, broken plates, and drying laundry signal abrupt interruptions in conventional scenes of suburban bliss. Tasks left undone defiantly shed the anxious weight of the unattainable perfection sold by women’s lifestyle magazines and social media feeds. Izel Vargas, based in Delray Beach, Florida, renders the fragmented infrastructure of an alternate world. Architectural elements coalesce and dissemble against murky horizons. Is this a view into a forgotten territory or an aspirational blueprint for a borderless existence? Located everywhere and nowhere, Vargas’s mixed media works echo the disorientation of displacement.

For each artist, home is a concept that exists in a liminal space: between comfort and burden, liberation and oppression, abundance and loss. New Works / Alumni Four challenges us to consider the complex power dynamics that inform the ways we claim and occupy the places we call home.

ABOUT THE EXHIBITING ARTISTS

Zoë Charlton creates drawings that explore the ironies of contemporary social and cultural generalities. She depicts her subject’s relationship with their world by combining images of culturally loaded objects and landscapes with undressed bodies. She received her MFA degree from the University of Texas at Austin and participated in residencies at Artpace Residency, McColl Center for Art + Innovation, the Skowhegan School of Painting, and the Patterson Residency at the Creative Alliance. Her work has been included in national and international exhibitions including The Delaware Contemporary, the Harvey B. Gantt Center, Crystal Bridges Museum of American Art, Studio Museum of Harlem, Contemporary Art Museum, the Zacheta National Gallery of Art, and Haas & Fischer Gallery. She is a recipient of a Pollock-Krasner grant, a Rubys grant, and was a finalist for the 2015 Janet & Walter Sondheim Prize. Charlton is an associate professor in the Department of Art at American University in Washington, DC. She holds a seat on the Maryland State Arts Council and a co-founder of ‘sindikit, an artist project space in Baltimore, Maryland.

Lori Larusso earned her MFA from the Maryland Institute College of Art’s graduate interdisciplinary program, the Mount Royal School of Art, and a BFA from the University of Cincinnati’s College of Design, Architecture, Art, and Planning. For the past 20 years, she has consistently exhibited work in solo and group exhibitions, both nationally and internationally. Larusso has been awarded numerous residency fellowships including the Sam & Adele Golden Foundation, McColl Center for Art + Innovation, Bemis Center for Contemporary Art, Willapa Bay AiR, The Studios of Key West, and the MacDowell Colony. She is the 2019 Kentucky South Arts Fellow. Larusso’s work explores overarching themes of contradiction, desire, and the everyday search for meaning and fulfillment. Her work is represented by Skidmore Contemporary in Santa Monica, California and Mulberry & Lime in Lexington, Kentucky. She currently lives and works in Louisville, Kentucky.

Izel Vargas was born and raised in the Rio Grande Valley of South Texas. A native of Alamo, Texas, his upbringing along the US-Mexico border plays an important role in his art making process. Vargas received his BFA in 2004 from the University of Texas-Pan American and his MFA from the University of North Carolina-Chapel Hill in 2007. As an arts educator, he has worked with college students, at-risk youth, and taught courses at public art centers to both children and adults. Vargas has been invited to lecture at several notable institutions including Duke University, the Mint Museum, and Vanderbilt University. Vargas currently teaches drawing, painting, and courses in visual concepts at American Heritage School in Delray Beach, Florida.