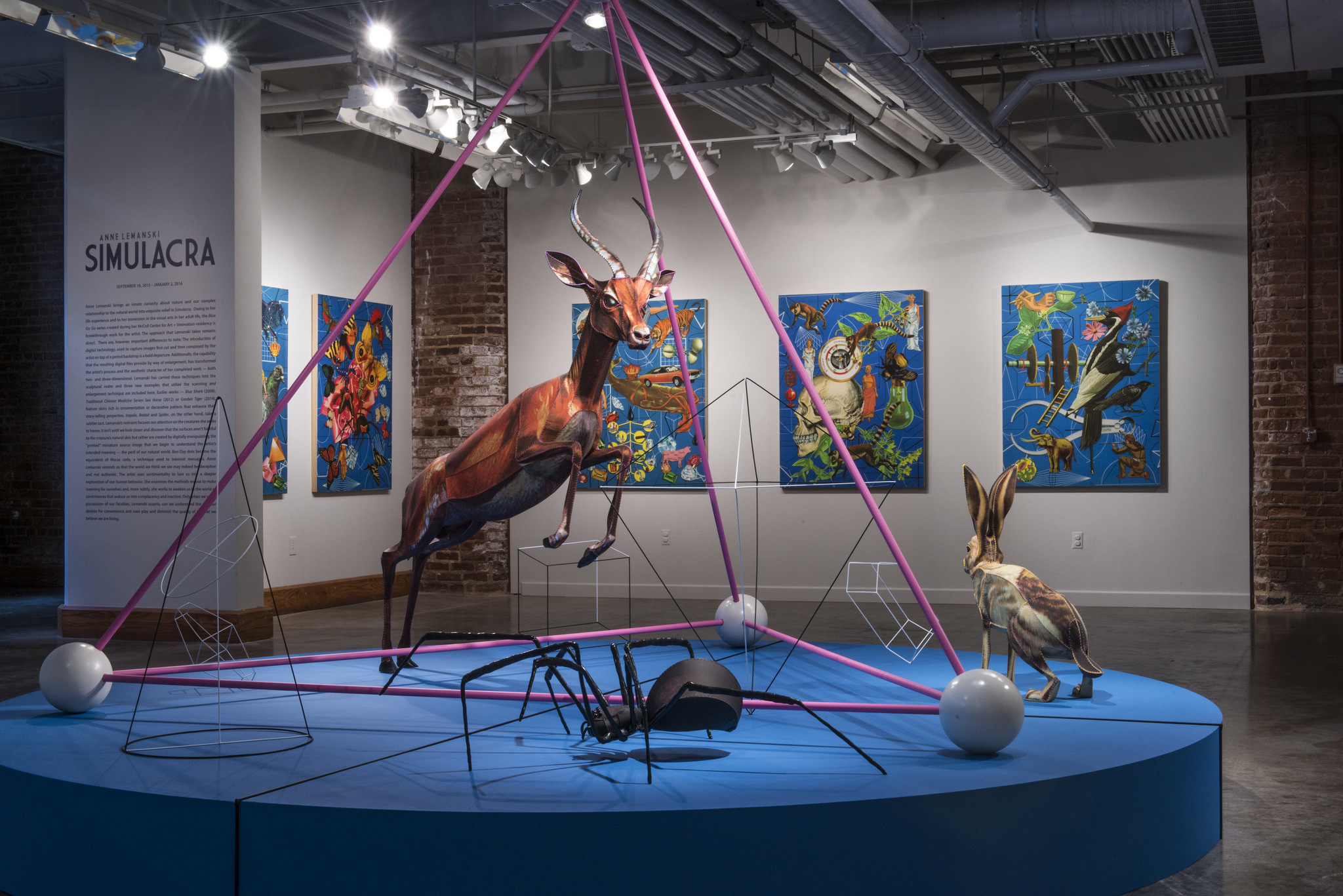 Anne Lemanski brings an innate curiosity about nature and our complex relationship to the natural world into exquisite relief in Simulacra, on exhibition from September 18, 2015 – January 2, 2016. Guest Curator is Mark Richard Leach.

Owing to her life experience and to her immersion in the visual arts in her adult life, the Blue Go-Go series created during her McColl Center for Art + Innovation residency is breakthrough work for the artist. The approach that Lemanski takes remains direct.  There are, however, important differences to note. The introduction of digital technology, used to capture images first cut and then composed by the artist on top of a period backdrop is a bold departure. Additionally, the capability that the resulting digital files provide by way of enlargement, has transformed the artist’s process and the aesthetic character of her completed work — both two- and three-dimensional.

Lemanski has carried these techniques into the sculptural realm and three new examples that utilize the scanning and enlargement technique are included here. Earlier works — Blue Shark (2008), Traditional Chinese Medicine Series: Sea Horse (2012) or Garden Tiger(2014), feature skins rich in ornamentation or decorative pattern that enhance their story-telling properties. Impala, Rabbit and Spider (each 2015), on the other hand, take a subtler tact. Lemanski’s restraint focuses our attention on the creatures she seeks to honor. It isn’t until we look closer and discover that the surfaces aren’t faithful to the creature’s natural skin but rather are created by digitally manipulating the “printed” miniature source image that we begin to understand the artist’s intended meaning — the peril of our natural world.

Anne Lemanski reminds us that the world we think we see may indeed be deceptive and not authentic. The artist uses sentimentality to lure us into a deeper exploration of our human behavior. She examines the methods we use to make meaning for ourselves and, more subtly, she works to awaken us to the world of contrivances that seduce us into complacency and inaction. Only when we are in possession of our faculties, Lemanski asserts, can we understand the role our desires for convenience and ease play and diminish the quality of life that we believe we are living

A native of Pittsfield, Massachusetts, Guest Curator Mark Richard Leach is an arts writer, curator, and nonprofit fundraiser. Leach is formerly the Executive Director of the Southeastern Center for Contemporary Art (SECCA) in Winston-Salem, NC. He is also the former Founding Director and Chief Curator of Charlotte's Mint Museum of Craft & Design.