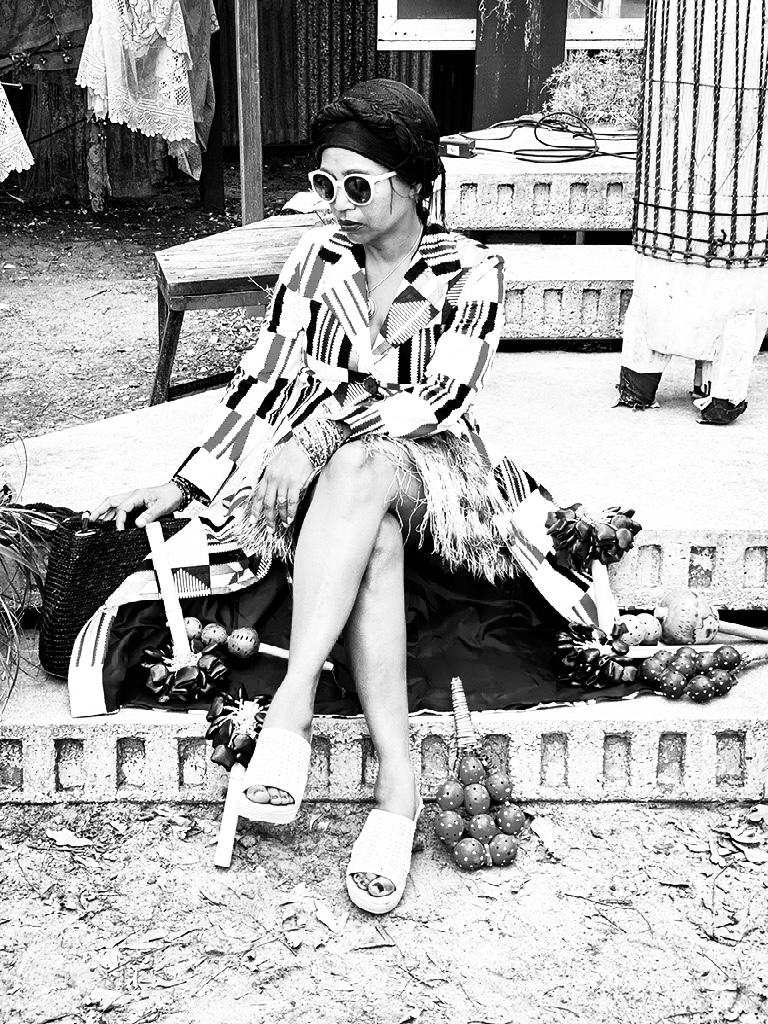 Portal of the Moon, an essay by Monique Moss

Like the sacred ritual practices beholden to the Santero/Santera in Santeria, the Houngan/Mambo in Haitian Vodou, or the Babalawo/Iyalawo of Ifa, the primary operative of the interdisciplinary Artist turned cultural practitioner is the activation of Ache, Ase, or Ashe. Defined in humble terms as the power to make things happen, the power to cause change, if you have it, you have it, irrespective of title or choice. The practice and work produced by those in the Art world who hear and heed to the call of Ancestors as a guiding intention, may be categorized within the genre of Abstract Art, and consumed as a form of creative expression that functions within a certain realm of contemporary mediumship; the capacity for communication of certain unknowns. We create works that deconstruct and reconstruct meaning from the microcosmic historiographies of our people in order to gain greater access to the ancient wisdom of the cosmos. Like the generations before us, charged with the will to survive and maintain the systems that sustained their Souls, we employ syncretism and abstraction to resuscitate, “rituals that had to go unnoticed, internalized, invisible, shadow like gestures, movements, veiled in rhythms and memwa, transformed, encoded into music, carnival… public performances (cordova),” visual art, literature, and many other transcendental expressions of the oppressed.

As Artistic Director and Choreographer of Third Eye Theatre Interdisciplinary and Improvisational Performance Company in New Orleans, Louisiana, I have collaborated with william cordova on works that have challenged the moral and ethical compass of Ivy League institutions in possession of ‘appropriated’ Peruvian artifacts or in possession of a publically displayed, wall-­‐sized painting depicting metal-­‐clad invaders massacring indigenous peoples; on work that has challenged the monumental system of white supremacy through the arrangement of a duel, a stand-­‐off, between an emboldened statue of confederate soldier Robert E. Lee at the center of a city circle and the potent vibrations of resistance from the Soul Rebels Band on a rooftop; and on work that has channeled the celestial energy of an Andean portal constructed in the middle of an open field receptive to lightening strikes and comet sightings. Our collaborations unfold like weaving gold threads to bond the essences of guerilla warfare, the parable of David and Goliath, and the mysticism of Gurus and Saints. Operating from infective levels of integrity and philosophical aptitude, his ‘poetic gestures (cordova),’ which in reality function as poetic activism, crystallizes memory of mantras that illuminate the power of mind over matter and might. His work aligns succinctly with folkloric practices of ritual activation associated with charged geographic landscapes, cosmic geometries, altar building, and accessing portals. And kindred Spirits recognize one another.

Drawing on his knowledge of native, Andean zigzag geometries as representations of infinity, and fractals as building blocks of the continuity of time and space, for example, cordova’s work insists that the viewer “slow down, re-­‐contextualize, connect the dots, and reconsider what we see (cordova).” We are subconsciously reminded that observation is part of the scientific method. He taps into vestiges of the unknown through a contemporary creative process akin to the intimacy of a spiritual practice. The meticulous intersectionality of multi-­‐dimensionality and third cinema strategies in his interdisciplinary cultural practice of poetic activism commands attention, contemplation, and deliberation on the ideals of Truths-­‐seeking for the purpose of liberation from all that oppresses. He counter-­‐punches against the constructed narrative of white, male superiority and its pervasive representations of the oppressed as subjects in the third person, as alienated aliens (the enslaved, the immigrant, the illiterate, the criminal, or the dysfunctional, supporting actor most often killed first in propagandized media). Viewed as militant within the collective colonial consciousness, people of color, in the pervasive struggle against virulent assimilation, conformity, and distorted, malignant representation, find solace in movements for civil rights, social justice, and cultural affirmation, which cordova researches in depth and centralizes in his work. He prods identity politics with his consistent avocation for the rights of the collective to self-­‐determination and self-­‐representation, ultimately, activating a formidable defense for self-­‐liberation of the proletariat.

Cultural Dissonance is not an experience of disjunction suffered uniquely by so-­‐called third world peoples in a so-­‐called first world, which cordova grasps as a Peruvian living in America. Cultural dissonance is a two-­‐way experience irrespective of class. It is rooted in cultural incongruence and incompatibility and has the potential of manifesting as zones of discomfort with the unconventional (one’s own history and culture), or with that, which is beyond one’s experiential or intellectual conception and comprehension. For me, one of the great questions of our time is, what universal Truths can we discern from a world constructed on (oftentimes intentional) historical-­‐cultural misrepresentation? Cultural Dissonance greatly impacts potential connection to expressions in abstract form, as understanding the history and culture of an abstractionist is like understanding idiomatic phrases in all of the languages the abstractionist may speak. Content, context, form, and function create integral frames of reference for unlocking the perceived mysteries associated with Abstract Art. Without fundamental frames of reference, such as understanding the literal versus the vernacular use and function of materials, the biochemistry of natural phenomena, or the correlation between socio-­‐political dynamics and economics within stratified communities globally, one could only expect to engage with dense Abstract Art at the Pavlovian level. A historical-­‐cultural knowledge base is essential in any effort to decode non-­‐linear, mélanges or sequences of objects, symbols, colors, shapes, movements, and sounds. Deficiencies in this knowledge manifest as skewed vision and result in banal interpretation of the unknown, the foreign, the unconventional, the abstract, and consequently, promote sensationalism, exoticism, otherism, stereotype, caricature, conformity, and outright misrepresentation.

Cordova’s holistic approach of using plurality of perspective and aesthetic to reach a wider, diverse audience resonates through his craft of material object juxtaposition. He employs abstraction as a proverbial, prophetic language by constructing works layered with impressions of reflection, inversion, parallelism, and pre-­‐Columbian or ancient geometries. These fundamental modalities of interdisciplinary cultural practice awaken collective ancestral consciousness and expand perception. In Abstract Dance, just as in any artistic form, effective abstraction can function as a cathartic catalyst for both the producer and the consumer by triggering heightened sensibilities and deep introspection in the quest to find meaning. It draws concentration within, to evoke feeling, connection, and relational inquiry, through the assemblage of ‘rasa,’ a Sanskrit term referring to ‘the essence’ of a thing. Abstract forms interrupt habitual, programmed motor responses and hierarchal, prejudicial, thinking patterns, and allow the mind and body to process meaning from multiple perspectives, or dimensions, simultaneously. Perspective is a tool in the construction of perception, and perception is a tool in the construction of reality, which becomes one’s Truth. cordova offers the words of “critical and public disruption modern dancer, choreographer (cordova),” Rudy Perez, “Stillness is not so much the temporal absence of movement, but is the charged potential for it (Rudy Perez).” In my practice of Abstract Dance, I identify this creative process as Thirteenth World Theatre, which I define using the formula 1 + 3 = 13. Indeed, algorithms drive human consciousness. And kindred Spirits recognize one another.

As knowledge of the Gate of the Sun and the Gate of the Moon rise within the memory of chosen sons and daughters of the real illuminati, modern belief systems and biased narratives crash and burn in their presence. Like the Santero/Santera in Santeria, the Houngan/Mambo in Haitian Vodou, or the Babalawo/Iyalawo of Ifa, through concentration, the Interdisciplinary Cultural Practitioner develops the ability to transform the physical body into a receptive vessel. Like a water-­‐based antenna, the cells and sensory organs of the body activate to receive sacred information and wisdom traveling through ether as electromagnetic vibrations and impulses. The being becomes an active portal, which creates portals. Like the priest or priestess, the abstractionist or Interdisciplinary Cultural Practitioner, serves as a human portal to conduct rituals that are object, movement, sound, site and psyche specific. Abstraction is a language of Algorithms, which corroborates cordova’s affirmation that his “works are in constant communication with one another (cordova).”

Encoded with history, culture, cosmology and iconography that uplift resistance and liberation movements against neocolonialism and white supremacy, william cordova creates work through ancient eyes. Recurring cultural symbols and references in his work that are indicative of commonalities in the sociopolitical experiences of peoples native to lands separated by oceanic distances, reflect the depth of his ethnographic research and subsequent ability to make universal connections. Encrypted word use in the proverbial titles of his work functions as an added key in deciphering projections of the human condition. The greater revelation illuminated by his work, however, rests in his masterful selection and juxtaposition of mundane objects and text to elucidate, comment on the universal and the cosmic. For some, abstraction is akin to spiritual practice. Being epic, however, requires knowledge of phenomena like the celestial light that radiates through the Portal of the Sun and Portal of the Moon.

The mission of Third Eye Theatre Interdisciplinary and Improvisational Performance Company is to use the Arts to achieve metaphysical and spiritual Liberation through Crossroads Collaboration, Trauma-­‐Healing Channeling and Psyche-­‐Site-­‐Specific Performances. TET seeks (1) to open cognitive space for ephemeral, yet strikingly cathartic experiences during live performance; (2) to facilitate the discovery of innovative movement through Improvisation and Experimentation; (3) to create choreography based simultaneously on historic and ethnographic research and on introspective, experiential exploration; (4) to use a multimedia and multi-­‐dimensional approach through collaborations with Artists in various Arts disciplines; (5) to directly connect real-­‐life experiences of performers through the embodiment of abstract, contemporary, experimental movement with conceptual content derived from research and foundational traditions of folkloric techniques and African-­‐based aesthetics; (6) to simultaneously employ traditional and contemporary movement forms and aesthetics; and (7) to activate metaphysical experiences through processes of revelation and healing through the Arts. -­‐-­‐-­‐ Monique Moss

A native of New Orleans, Monique Moss is a Choreographer, Independent Curator, History Tour Guide, and Artistic Director of Third Eye Theatre Interdisciplinary and Improvisational Performance Company. She received a BA in French, MA in Latin American Studies, MFA in Interdisciplinary Dance Performance from Tulane University, and a MA in Museum Studies from SUNO. Her research-based performances have been presented nationally and internationally.

Moss was co-producer of the film Silent Parade directed by William Cordova and Creative Director of the Congo Square segments in the film City of a Million Dreams directed by Jason Berry. An adjunct professor in Dance at Tulane University for eleven years, Moss has received awards and research grants from the Smithsonian NMAAHC, Fulbright-Hays Teacher Fellowships to Japan and South Africa, LDOA, Kellogg Foundation, Tulane University Office of the Dean, Newcomb Institute, Newcomb College Center for Research on Women, Big Easy Classical Arts Awards, Mayor’s Office of Cultural Economy, and the New Orleans Tourism and Cultural Fund.