Art thrives when artists do.

Art thrives when artists do. 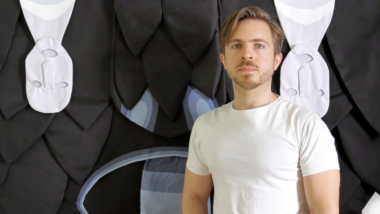 “My work creates its own universe where the past and the present meet, a mythology of beings far removed from their time to inhabit our world.”

Tadeo Muleiro’s work establishes links with the imaginary of various ancestral cultures, drawing on images from Argentina and Latin America and proposing a crossroads with contemporary art. Imaginary beings embodied in large sculptural textiles move through the telluric and mythological, weaving bridges with elements of the present such as the pop culture of science fiction movies and comics. The central components present in his textile works turn his video creations and performances into costumes as inhabitable, sculptural forms.

The costumes allow Muleiro as a performer to embody and put into play stories that unite the present, the past, the ritual and the autobiographical within a mythological universe. Each character in this mythological universe builds and includes various fictions. This universe includes diverse cultural references where the past and the present meet and give rise to multiple identities as a mythology of beings who are far from their own time as they inhabit our world in the present.

More About the Artist:

Tadeo Muleiro lives and works in Buenos Aires. He has a degree in Visual Arts from the University of the Argentine Social Museum and is a professor of sculpture at the National University of the Arts of Argentina. He has obtained national and international scholarships, including the artistic residency at La Napoule Art Foundation in Nice (France) held in 2020, and the residency at the Building Bridges Art Exchange in Los Angeles (USA). In Belgium, the GloArt Center financed his project "Cernunnos" carried out in Lanaken in 2019. In 2012, he received the Visual Arts Scholarship from the National Fund for the Arts of Argentina.

Muleiro has exhibited at the Sueños Sombra in Quimera Galería and 4000 Años de Historia, Bienal Chaco in 2022, Arte en Juego, Fundación PROA, Buenos Aires 2021, Station E: In transit in Building Bridges Art Exchange Gallery, Los Angeles, California 2019; Extracorporeal: Beyond the Body at the MOLAA, Museum of Latin American Art, Long Beach, California in 2018 and Borges: Fictions of an Infinite Time at the CCK Kirchner Cultural Center in Buenos Aires, 2016. His work was exhibited federally with exhibitions in different provinces of Argentina such as the Timoteo Navarro Museum of Fine Arts in Tucumán, the Franklin Rawson Museum of Fine Arts in San Juan, and the Rosa Galisteo Museum in Santa Fé.