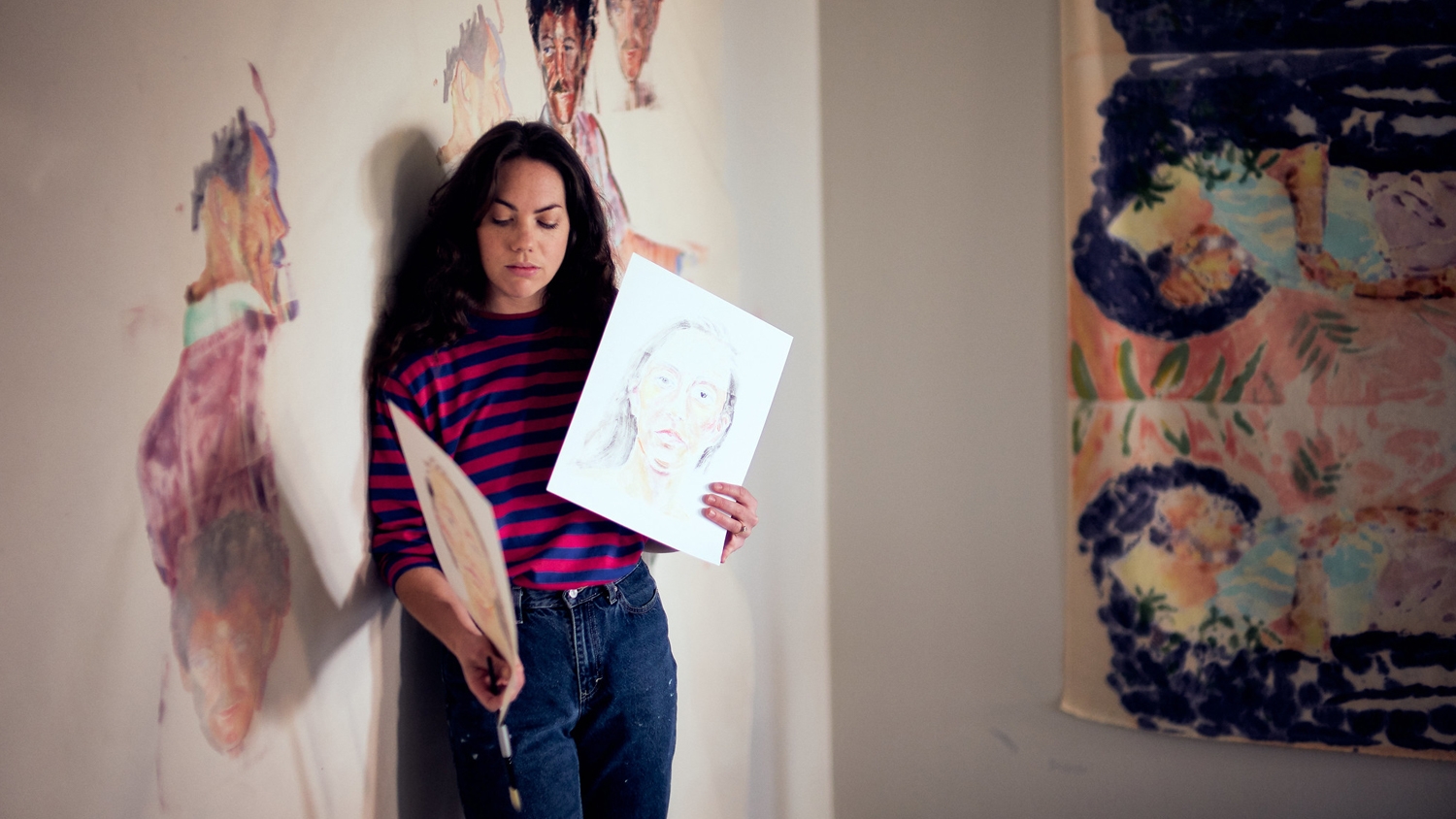 Exploring the stages of maternity and motherhood, before and after birth, was Holly Keogh’s focus for her McColl Center residency in partnership with Atrium Health. The Charlotte-based painter and winter/spring 2020 artist-in-residence is known for her lively method of turning photos into paintings, family portraits whimsically remixed and full of character. With a studio and resources to expand her practice, painting mothers would be a new endeavor for her.

What began as an interesting experiment turned into fascination for the stories of the women Keogh met along the way. Early on, she connected with Pamela Cobb, MD, OB/GYN, who leads the Centering Program at Atrium Health that brings together pregnant patients due around the same time.

When one of the cohorts met for their monthly group session with Dr. Cobb, Keogh joined the circle, learning more about the women’s pregnancies and personal lives. She photographed the women with a film camera after the class had ended, some of them choosing to sit with their partners, to create images that she would later develop, process, and paint.

Aside from the group session, Keogh asked for help from friends, and found acquaintances who were interested in joining the motherhood project. To fit in their schedules, she would meet at their places of work to photograph them, like Karleigh, a florist. Keogh painted Karleigh in her blossom shop with loose, brushy, neon-bright colors, not in replication of the physical surroundings but in representation of the individual whose story found her there.

Keogh hadn’t painted that way before, but she was determined to tie in unique details that made the women feel special. When she researched images of motherhood, Keogh referenced the Virgin Mary and other maternal examples in art history to address her revisited images. “Instead of painting them with humility, I made realistic images of these women to feel beautiful. After meeting them, there is a special energy a mother has, a strength in them that wasn’t there before.” She realized that was her primary goal, so each woman, each story, had its own unique approach.

“There’s a difference between authorship with family and this project, distorting an image versus creating a likeness. Since we didn’t know each other well and I respected them so much, I wanted to come up with a creative way to deal with that relationship to a subject.”

Processing became a tool for Keogh: she took photos of the womens’ photographs repeatedly until achieving the distortion she liked. After many portraits, a light was created that made the subjects glow, like an aura they radiated. Inspired, Keogh would paint in high-contrast—a black background for light subjects—like she did for Odelia. Odelia just moved to the Charlotte area from Israel, and would be staying with a friend to have her first baby in Charlotte.

One woman she met invited Keogh to her home and shared a deeply personal story (giving Keogh and us permission to share it). The artist met the family, photographing Lindsey and the family’s four children with a film camera. There had been other siblings; in trying to get pregnant with her husband, Lindsey had delivered six stillborn children. Because it was not in their beliefs to end the pregnancies, the family decided to share the stories instead. Lindsey showed photographs from her delivery days. The overwhelming love and support she received and the care for each baby as part of the family were evident to Keogh as the older two daughters told the artist each of their names. Recently, Keogh visited the family—the older children were loving and holding the healthy baby who just turned two months old.

Keogh’s motherhood project gained momentum. So many mothers contacted her, however, that she could not meet with all of them before the pandemic put a hold on the project. She shifted gears during the lockdown to focus on other areas of her practice. “This project could have been years-long,” Keogh remarked. “Some of [the paintings] are very strong and finished, and some feel unresolved based on time and loaded meaning behind them.” This project, though, could be something she continues to work on and work with in the future. It made an impact on Keogh that she carries forward. “I pushed myself to paint differently and surprised myself.”